I ended up working on an olive farm in Greece thanks to pure serendipity.

I had just wrapped up my morning tour with Athens Insiders, and was chatting with Daphne, my guide. She asked me about my plans for the rest of my trip.

“I’ve been trying to find a good WWOOF location in the islands,” I said. “But I can’t find any accommodations with Internet, and I need to do my freelance stuff.”

“My parents take WWOOFers on their farm in Lesvos all the time,” she said. “And they have great WiFi.” Boom.

And so by the end of the week I had secured a work placement on the Tragakis estate on Lesvos, a large but non-touristy island in the Northern Aegean.

The islands of the Northern Aegean are completely different from the big names like Santorini, Mykonos, and Ios. For one, they’re a lot harder to get to, so they’re not touristy at all (or most tourism comes from Turkey). Secondly, they’re busy year-round, and not just during the tourist season. Fave thing: fresh squeezed orange juice.
I stepped off the bus in Mytilini, Lesvos’s wonderfully busy university town, and immediately got lost. The buses taking me to Perama were not listed in English. I walked in circles asking people for directions, and they did what they could to help me out. At that point I had popped two Ativan because my flight to the island had been nerve-wracking, and I was sweating bullets. I had to get off the bus and take a short ferry across Geras Bay to Perama, where my host would pick me up. The ferry was a tiny fishing vessel with a half-naked women calendar on the wall alongside a framed photo of a mountain landscape. The only reason I found the ferry stop was because one lady on the bus spoke English and helped me out. I was too dull from the drugs to figure out what the feck was going on, and so I sat there foolishly drooling into my lap.

But I made it to the farm, and found myself high in the hills of an olive farm, with a view overlooking the sea and across to Turkey. My WWOOF accommodations were pure luxury. Lena, a lovely German girl, was the only other volunteer worker when I showed up. We had an entire apartment to ourselves. Our hosts Dimitri and Kiki welcomed me with a full spread of food and homemade wine. Lena, the other WWOFer. I literally drove the poor girl to tears with my snoring.
A typical day went like this: Lena and I awoke at 7 AM. She was the happy chef, while I preferred to clean up the kitchen. We’d make fresh squeezed orange juice, buttered toast, Greek yoghurt with honey from the farm’s hives, and coffee or tea. We’d take our breakfast out to the table overlooking the bay and we’d sing out a “kalimera!” to our boss, Michaelis. Then the work would begin.

Michaelis was a rough-and-tough farmhand who resembled a Greek warrior: big and stocky, with a full beard. He constantly carried around frappe in a travel cup, and smoked cigarettes while working in trees’ shade. He also did not speak a word of English. Not one word. We got by on hand gestures and general grunting. He’d whistle to us, point at something that needed attention, and then would demonstrate what needed to get done. The process flowed beautifully. The work entailed everything from gathering the pruned branches of olive trees for mulch to weeding the vineyard. The former I loved; I felt like I was working out for five hours a day, and I threw the branches around while pretending to be a Spartan warrior tossing spears. The latter was excruciating torture. Lena somehow managed to find peace in the process of ripping out weeds by the roots. She sat in the vineyard and worked quietly for hours, somehow doubling the speed that I moved in. I could never get comfortable. I’d kneel or sit and my body would start aching. I’d stoop to clear the soil and my back would break. I bitched and moan, a lot. Poor Lena.

But the work was rewarding, simply because it was so goddamn good to work with my hands. We worked under the spring Mediterranean sun, dusty and dirty, taking in the thousands of olive trees growing hillside on the estate. Birds chirped around us while we toiled. Sometimes the donkey would make his way over for a head scratch and to bat his big, dark eyelashes at us. Even Michaelis grew warmer as the time went on. On my way to the top of the hill one day, he pressed his finger to his lip and motioned for me to come near the garage. Inside, a mama chicken and her baby chicks peeped around the wine barrels. Sometimes Michaelis would bring his one-year-old daughter Penelope to see me. His wife, a sweet and chatty Mexican, had been a former WWOOFer herself.

We’d work until 1 PM and then scatter for lunch. Dimitri and Kiki kept us well fed, although we took care of most meals ourselves. Lena was a brilliant cook. Using ingredients grown in the garden, she’d make handmade ravioli stuffed with squash, and fresh salads with Greek ingredients. We’d take our books and notebooks out to lie in the grass near the pool and read for hours. Sundays were our day off.

Lena left after our road trip around Mytilini and then I was on my own for a few days before Russ showed up, an older British Canadian who took to the farm-life with immediate gusto. My last night on the farm, we drank ouzo and chatted for hours while watching the sun go down. There were beaches nearby. Me happy.
I idealize these moments in this blog post, because they actually were idyllic. But there were moments of full body pain and agonizing blisters, and I never want to weed another garden as long as I live. The isolation sometimes got frustrating, even if all I wanted was a goddamned chocolate bar or a pint of beer. If you’re not familiar with WWOOF, you help with farm labour for half a workday and then you have the rest of the afternoon off. All this is in exchange for room and food. For a freelancer like me, it’s perfect. I must have saved hundreds of dollars during my time on Lesvos.

If you decide to do a WWOOF experience like this, sign up for WWOOF. Or do a search for farms outside the WWOOF website to see what comes up. If it sounds too good to be true, it probably is.

An incomplete and totally biased guide to St. John’s, Newfoundland and Labrador
My favourite Irish expressions 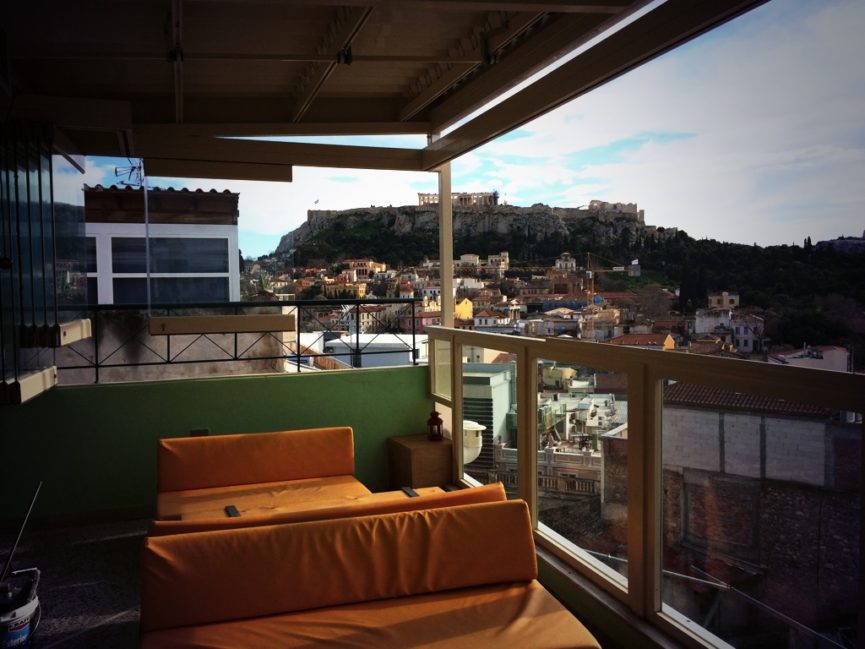