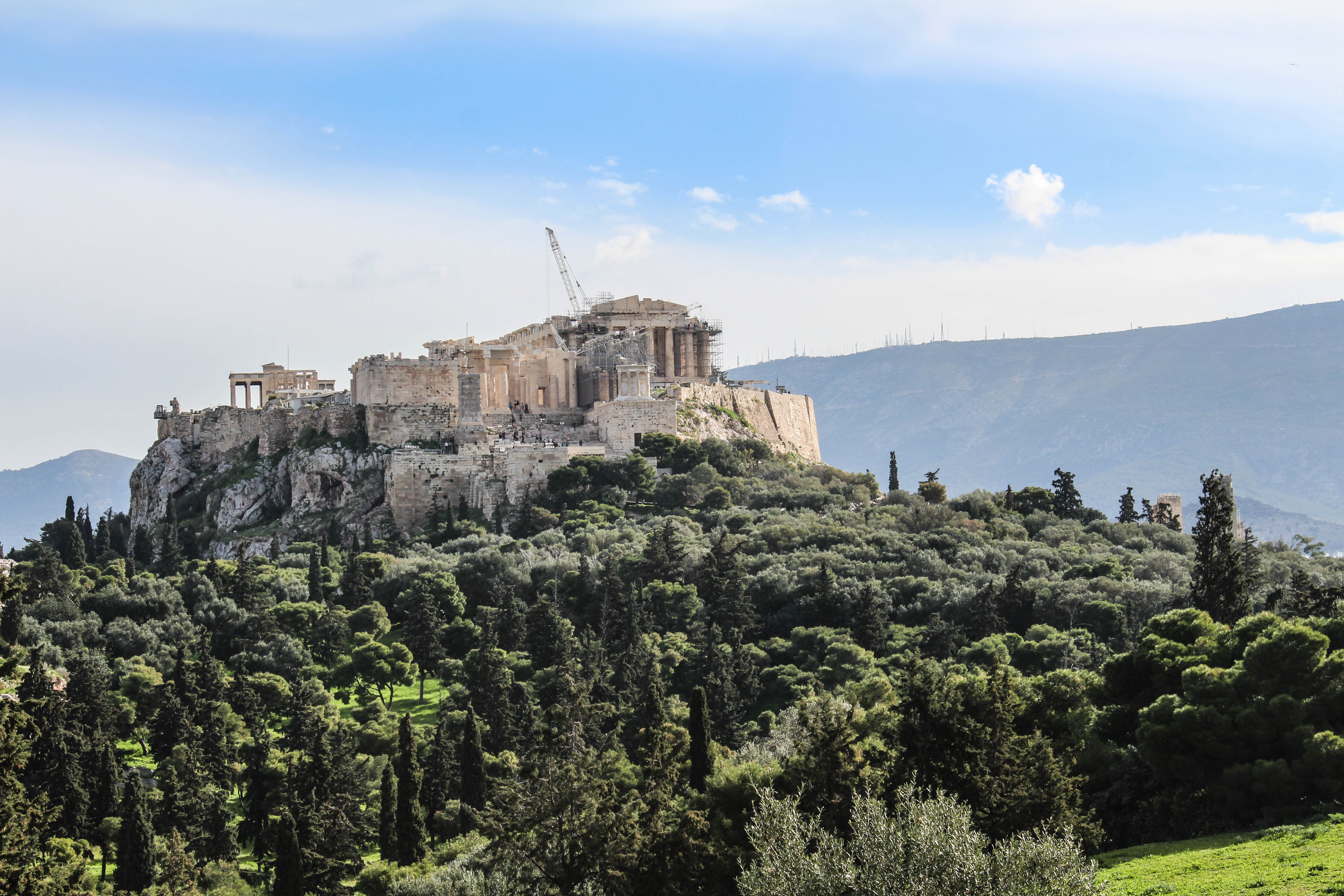 My reasons for loving Athens

I arrived in Athens after 26 hours of flying and immediately hopped into an unmarked cab with a stranger. As we sped through the city, completely void of life, he attempted to make small talk with me. I could barely garble out any words; my head was made of stone. I was constantly suspicious of his every action. We turned onto a shady alleyway and my heart hammered in my chest.

Instead, he stopped to find directions (since mine were stupid) and then helped me lug all my gear to the Athenstyle hostel’s door. He patted me on the back like I was his daughter. “Enjoy Greece,” he said before leaving. As it turns out, everything I knew about Athens and its people was wrong. I awoke at 8 AM to a rooster cock-a-doodle-doing outside my hostel’s window. In the city centre. The view from my balcony was a welcomed sight: a broken and downfallen Acropolis atop the hill, almost close enough to touch.

If you read my NYC post you’ll know that I’m not very good at the whole city thing. Thus I hired a private tour with Athens Insiders for the day (and they come highly recommended by yours truly). Daphne, my guide, met me in the lobby and we started our tour on foot. But first she popped into a garage around the corner and ordered koulouria, traditional sesame and honey sweet bread. A garage that sells baked goods.

Daphne led me through Monastiraki Square, where a furniture bazaar was in full swing with antiques and retro pieces of art. Candelabras stacked next to wooden trunks. Cushioned chairs piled onto oak tables. A designer’s dream. She then took me to Pnyx Hill, a green space where much of Athens’ political activity used to take place. From here we climbed a short stone path embedded with ancient pottery for the best view of the Acropolis, and not any sort of tourist congestion whatsoever. I’ve heard a few complaints about the graffiti and the pollution in Athens. It’s true that the sidewalks in some areas are littered with trash, but for the most part I found the city clean and comfortable.

As for the graffiti, I’m not usually a fan. In this case, though, it fit. It’s a political capsule of passionate people and ancient history. I was surprised to learn that Athens is a relatively YOUNG city – before the civil war, Athens was but a tiny fledgling of a town. The population exploded when people came fleeing the war. It’s a chaotic mess of streets and people. Relish it.

My absolute favourite area of the city is Exarchia, the anarchist district. It’s filled with coffee shops and young people, particularly students. Even the bookshops are covered in graffiti. If you ever get a chance, visit Nosotros – a free social space used by artists and musicians for live shows, readings, and simply just as a judgment-free place to hang out. Athens was my first real introduction to Greek food, particularly meze (small plates, like appetizers). Daphne and I first stopped in the Plaka – a “poor” but pretty neighbourhood with traditional Greek homes and stone stairways – for Greek coffee. (Or Turkish, whatever you like to call it. But maybe don’t ask for a Turkish coffee in Greece.) Apparently I take mine double medium sweet, kinda like ordering a medium-double-double at Tim’s.

Then we stopped for lunch at Dexameni in Kolonaki, the trendy affluent area of the city. We sat outside in the sun, the glorious sun! There are fewer things better in life than enjoying a cold beer outside in the SUN. We ordered grilled calamari with olive oil and lemon, and lentils with sun-dried tomatoes, feta, and herbs. I couldn’t remember the last time I’d felt so happy. Later in the evening, Anthia, another guide, took me to Yperokeanio, a tiny restaurant you’d miss if you didn’t know where to look for it. It’s inside a narrow alley, and is empty during the day. The menu was handwritten on a piece of paper. I tried the alcoholic tsipouro for the first time (and likely the last), and we ordered plates of salted fish, grilled cheese, and salad.

Daphne later invited me to dinner with some of her friends at a place called Kafenio. The food was superb but I loved the atmosphere the most. I was sitting with a handful of very welcoming Greeks (and one Austrian), in front of a wood-burning fireplace emanating the familiar smoky scent of wood throughout the restaurant. By the time I left, I had a handful of phone numbers and some new friends.

There’s a noticeable absence of good Greek beers, though (although a 2-litre bottle of white wine from the minimart only costs 2.50EUR, so I can’t complain too much). Mythos is a reasonable option, as is FIX. But the only small craft brew I’ve been able to come across is Volkan, brewed in Santorini. Their dark brew is one of the best I’ve ever had. Apparently there’s a Donkey beer here somewhere too, but restaurants won’t keep it in supply until the tourist season starts because it’s too expensive. Oh, Greece.

Forget what you know about Athens. I’m pretty certain my experience was made better by the fact that I visited during the off-season, in February. If you can do it, visit in the off-season. It was still warm and lovely, but without the stifling 40 degree temperatures. The Acropolis is never crowded because there’s no one around. Most people use Athens as a gateway to the Islands, but skipping it entirely would be criminal. It was also SUPER easy to meet Greeks, and their hospitality is wonderful.

If you’re looking for a great hostel to stay in, I highly recommend Athenstyle.

Finally, if you want some insider experiences, definitely give Athens Insiders a chance. The guides all became my friends – in fact, I’ll be spending some time WWOOFing at Daphne’s parents’ farm in Lesvos next month.