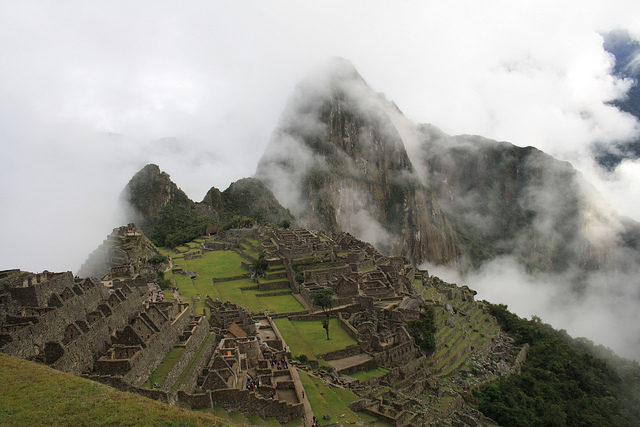 I’d like to think I’m not a jaded traveller. It’s a conversation I’ve had with other bloggers time and time again, and most recently, with Annemarie Dooling on our South America Contiki trip. You hit this wall where you no longer find things fascinating, or interesting, or even a little intriguing.

This hasn’t happened to me in the slightest—the opposite effect has occurred, in fact. I get so excited in new places, I succumb to shakes and nerves and wide-eyed typical tourist behaviour. I snap 300 photos of the same thing and then pose in front of fountains.

BUT those moments are always when I find myself someplace unexpected, like at Peyto Lake in Jasper. It’s never when you’re preparing for a “must-see” Bucket List item, and although I was excited about Machu Picchu, I was also preparing myself for a little disappointment. There was none. No twinge of sadness, no regret, nothing to mar the moment.

Half of my Contiki crew awoke at 5 a.m. to prepare for a sunrise view of Machu Picchu. The rest of the group never made it to the early morning trek, being the unfortunate victims of a stomach bug. After we navigated the terrifying road of 14 switchbacks, we arrived at the site with daylight already spreading its way across the mountain.

We climbed stairs. We climbed a lot of stairs throughout the trip, our knees wobbly and calves aching, until we stood at a little plateau overlooking the ancient city. I couldn’t see a goddamned thing; we were entirely shrouded by clouds. I was tired, and cranky, and then suddenly with a few brilliant rays of sunlight, the clouds parted and Machu Picchu lay out for us in glory. I snapped 300 photos. along the Inca Trail

We hiked along a portion of the Inca Trail to reach the Sun Gate, where the sun shines through on Machu Picchu during the summer solstice. From this vantage point and looking down upon the city, the enormity of what the Incas created starts sinking in. According to our lovely guide Gaby, nobody even knows for sure why the city existed, but the most popular theory is that it was created as a sort of resort for the king. The city could have held up to 400 people. The whole area radiates a certain kind of energy, attributed to either all the quartz lying around or some other ethereal force. To the far right, in what looks like a valley, you'll see the Sun Gate

The sad part is that the Incas had limited time to enjoy their luxury before abandoning the site entirely. They knew the Spaniards were coming, and they knew the best way to protect their city was to abandon it.

Everything at Machu Picchu was built with Mother Earth, Pachamama, in mind. Gaby, who belongs to the Quechua people, says the Spaniards could never wipe out her heritage, because it isn’t tangible. “As long as we have the sun, the moon, the stars, our religion will not die.” I cried. I cried a lot on this trip for one reason or another, but standing there that morning with a handful of other travellers all making a pilgrimage to one of the world’s most coveted, sacred destinations made me suddenly very aware of how blessed I am to have such a moment. I’ve been struggling a lot lately with travel blogging and making ends meet, so much so that I’ve considered going back to the office life. I know that’d be a mistake. For me, no house, no car, no closet filled with expensive clothing will ever equal the experiences I’ve had while travelling. Every now and then, I need a good trip to remind myself of this fact.

Or a punch in the face. If you ever hear me complain again, you have full permission to punch me in the face and/or ovary.