I arrived at the Tiburtina bus station in Rome at 9 PM. It was dark, disorienting, quiet, and slightly menacing. My friend had warned me about showing up late at night, citing thieves and other dangers. So I quickly steeled my most threatening “bitch face,” and headed out to find my hostel.

A few days later I was wandering around Trastevere wondering if Rome could become my next home.

Yes, the tourists are overwhelming. Yes, the underground is a nightmare for claustrophobes. Yes, the vendors constantly shoving selfie sticks for sale in your face are more than a little irritating.

But there’s something special about living right next to ancient Roman ruins, or being able to picnic at the Circus Maximus  — the former site of chariot racing. I want to buy an apartment just to dig a hole in my basement and see what treasures I find.

I managed to do mostly everything I wanted to do in Rome in five days.

Day 1 – Colosseum, Palatine Hill, and the House of Augustus

I have a fascination with the ancient world. There’s something so humbling in the knowledge that people were doing ridiculously smart things 2,000 years ago. The Colosseum was basically my entire reason for coming to Italy (along with Pompeii). I use Google Maps to get everywhere in cities. Everywhere. Early in the morning on my first day in Rome, I left my room at Alessandro Palace Hostel and headed towards the Colosseum, with my head down, following the directions. After 20 minutes of walking I turned a corner — head still down. I looked up to get my bearings and ‘lo and behold, there she was. Two thousand years of ancient wonder.

I did a Colosseum tour with Walks of Italy, because I wanted a better understanding from my visit. I’m glad I did. My guide pointed out things I would have missed, like markers on the floor to show where columns were supposed to be assembled. We skipped the insane line-up and had mostly quiet corners to ourselves. No matter how much of the ancient world I see, I’m still overwhelmed by how advanced the Romans were.

But my favourite stop that day wasn’t the Colosseum — it was Palatine Hill. It’s home to some of Rome’s oldest ruins, including the House of Augustus.

Casa di Augusto and Casa di Livia are the 1st century BC homes of Emperor Augustus and his wife, Livia. They’re remarkably well preserved, and you can only see them with special permission. Like on a Walks of Italy tour.

Augustus was the first Emperor of Ancient Rome. Fun fact: he was such a popular ruler that when his house burned down, the people of Rome all donated money to help rebuild it…both rich and poor. (And Augustus, being the swell guy he was, only accepted one coin from each donation.) Nowadays you can visit the home he moved into on Palatine Hill, and much of the wall paintings are still perfectly intact. His wife’s home, however, is even more extravagant. You can still see the marble floors, domed ceilings, and the massive arches.

The best part is that when you visit these homes and their lavish paintings, you do it alone with your small group. Just you and a few other travellers, and some 2,000+ year old paintings.

I mentioned before that my food tour experiences in Italy were the highlights of my trip, and the only times I felt truly immersed in Italian culture. Rome was no exception. I loved my Eating Europe food tour in Prague so much I decided to hop on one of their tours in Rome’s Trastevere — the edgier, more local-friendly neighbourhood on the other side of the Tiber River. We started out with pastries from a tiny bakery before moving on to various small speciality shops in the area. We tried porchetta (an unbelievably tender boneless pork roast) at a shop where the owner buys his pork from his uncle’s pig farm, and then sends the meat out of town twice daily to be roasted (and his 90-year-old mother still runs the cash register). We tried stuffed arancini at a “fast food” joint. There was fresh pasta and heaps of gelato and my favourite to end the day: little dishes of crème brûlée. I ate two.

I love these food tours because you get to meet the locals and try out foods you might overlook otherwise. Plus you learn all the insights into Italian food culture, like how to appropriately drink espresso and how to spot REAL gelato.

I’ll write a more in-depth piece about the food in Rome, because there is a LOT!

To be honest, Vatican City was probably my least favourite part of my time in Rome. I’m so glad I did it, and I’m so glad I was able to witness such amazing artwork. But I definitely don’t need to do it ever again.

The crowds inside the Vatican were overwhelming beyond belief. And you really get to experience the worst of people when you’re all competing for the same photos. (Including those dicks who like to snap photos inside the Sistine Chapel, even if they’re not supposed to.) I did this tour with Walks of Italy again, so that I could beat the line-ups and learn more about the artworks. Plus I wanted a complete introduction so that I wouldn’t overlook anything important.

Our guide was knowledgeable and friendly; she easily led our small group through the throngs of people. We visited the Sistine Chapel, Raphael the Rooms, the Pinecone Courtyard and the Gallery of the Candelabra. We saw St. Peter’s Basilica, and my personal favourite, the Gallery of the Maps (you can imagine why!).

One of the most thrilling stops along the way was seeing Laocoön & His Sons — a sculpture I spent a lot of time studying back in university. I had to fight my way to the front to see it, but it was worth it.

Trastevere was my favourite part of Rome.

In some ways this neighbourhood reminded me of Berlin, with its hipster-like atmosphere and plenty of shops dedicated to speciality items like books and old records. There were also street performers on every corner. One evening I just stood for an hour listening to a band play on the sidewalk. Everyone was clapping and singing along — it was a beautiful thing. While it’s not exactly possible to escape the tourists even here, there is a big difference compared to the madness you’ll find in other places. Trastevere is best explored on foot, while wandering aimlessly through cobbled streets lined with restaurants, cafes, and apartments. It’s quieter. Me and my friend Lisa got lost for hours just wandering through narrow alleyways, past homes with their window shutters thrown open and bright boxes of bougainvillea spilling into the street. I love the crumbling facades painted in soft pinks, yellows, and blues.

At sunset, we walked up to Gianicolo Hill (or at least halfway up), grabbed a beer, and took in the view.

On my last full day in Rome, I joined a driving tour with Walks of Italy to see a little side of Rome that few people get to explore. This was another favourite day of mine (although to be fair, all days in Rome are fantastic).

We started in the Jewish Ghetto, walking through some of the quieter streets and visiting the “Jewish Colosseum” (now part of a fancy apartment building). Then we hopped on our bus and headed to the ancient Roman Appian Way — a road connecting Rome all the way to Brindisi, in the southeast. The road was was finished in 312 BC, but it’s still in pretty good shape. You can even see the ruts in the road left by chariots, and every so often you’ll find a “moonstone” — a kind of rock that lights up in the moonlight, serving as a sort of streetlamp. Those Romans were brilliant. Nearby is the huge mausoleum of Cecilia Metell, a Roman noblewoman. We also spent some time at the Park of the Aqueducts, where ancient aqueducts once carried millions of tons of water into Rome. They’re well preserved. Rome’s plentiful fresh water is one of my favourite things about the city; you never have to go far to find a fountain with crisp and delicious water. I love that places like these parks are completely open to the public. You can pack a picnic and come hang out in the shade of a 2,000-year-old relic. Our last stop was atop Janinculum hill, where there’s an excellent view of sprawling Rome. A cannon is fired daily. We were told to wait for the firing, and yet, I still dropped my phone in fright when the thing exploded. I’m surprised I didn’t accidentally hurl it over the side of the hill as my heart leapt into my throat. Don’t stand too close, friends.

I loved Rome’s atmosphere the most.  Every city has its own unique vibe. There’s an appreciation for the good life, for dolce far niente — sweet doing nothing. One of my favourite evenings involved just ordering pasta and a bottle of wine with Lisa at a restaurant with tables pulled into the street. We were sandwiched between two Italian couples, and the air was balmy and sweet.

Sometimes I think that’s the best way to get to know a city: a bottle of wine, a sidewalk table, a warm evening.

On coming home, after one year
The last few months in books 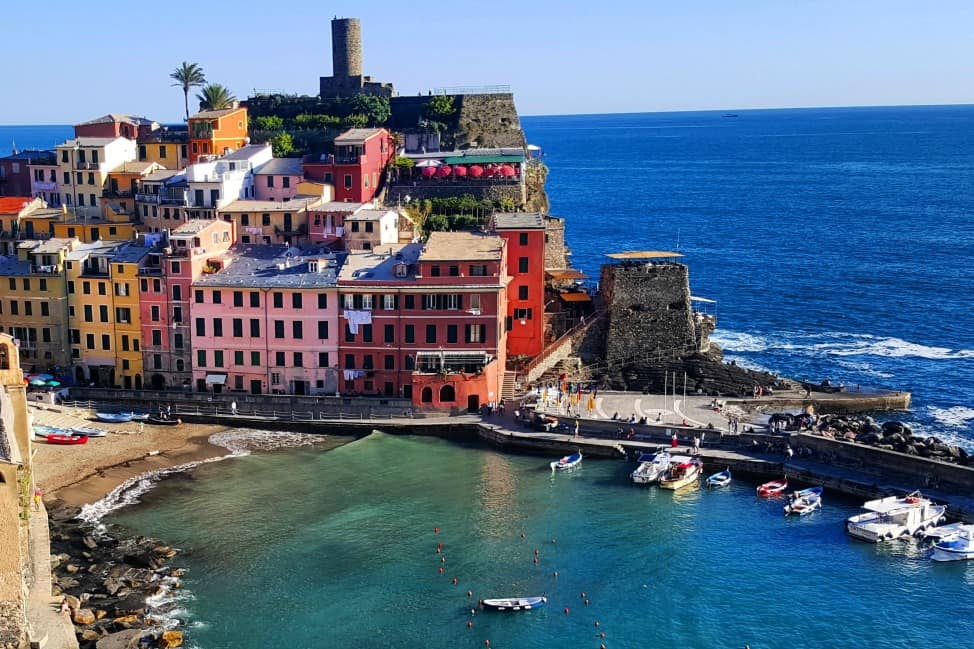 Planning a trip to the Cinque Terre